The Vision is the Victory
Thursday, July 24, 2014 by Lori Hynson

Last evening, I attended the Suburban Baptist Association of Southeastern Pennsylvania’s Summer Revival. Our revivalist was Reverend Dr. Alyn E. Waller of Enon Tabernacle Baptist Church in Philadelphia, PA. His message was so SuperGal-centric that I knew I needed to share it. In addition to his direct quotes, this is my take on his message. Credit and thanks to Reverend Dr. Waller. 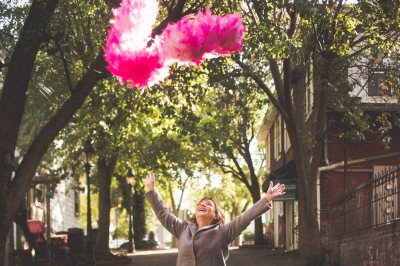 By our very nature, SuperGals tend to be controlling. We like to know how things are going to turn out. Our skeptical eyes want to see evidence. Or at least see efforts are producing progress.

It starts out well. God gives you a vision. A calling. Makes you a promise. He gives you a task, or a ministry, or a solution to a problem. God presents His plan, and you jump on board, SuperGal-style.

Fast forward a bit. A few days. Months. Er, years? Frustration sets in. “Lord,” you say, “what happened? Did I hear you wrong, Lord? I mean, you asked me to do this, and I did, but now nothing is happening. You gave me a vision, but I’m just sitting here. Stuck.”

Did God change His mind? Did we do something wrong? Were we imagining things? Listening to the wrong voice?

In Joshua 6, we read the story of Jericho. God promised Joshua and the Israelites that He would give them victory over the city of Jericho. His instructions, though, were a tad odd. They were to march around the walled city once per day for six consecutive days. Then, on the seventh day, they were to march around seven times, then blow the trumpets and shout. The shout, God said, would bring down the walls of Jericho.

This is the place in our stories, on the way to our blessings, where most of us falter.

Sure, we eagerly start out in obedience, eager to see God’s plans for us. We march around for a few days, but perhaps by Day 4, we begin to get weary. By Day 5 we are peering at the wall checking for cracks as we march around it. But there are no cracks to be found. By Day 6, not only are there still no cracks, but we’re frustrated. Tired.

“This obviously isn’t working,” we think. “We must have misheard the instructions.”

Fortunately for the Israelites, Joshua apparently had more faith than us SuperGals. Because on Day 7, they were back, bushy-tailed and ready to rock and roll. Sure enough, they marched seven times, then blew the trumpets and shouted their little hearts out.

And the walls came tumbling down.

Wait! Did you see what happened there?

The shout of victory came before the walls fell. They believed God’s promise, and followed His instructions through to the end.

“The vision is the victory!”

Are we stomping around on Days 4 or 5 or 6, maybe grumbling, questioning, doubting because we seem stuck? Because what we expected to happen isn’t happening fast enough? Because there is no real evidence that we are making progress? Maybe we are walking a little bit but keep stopping to doubt?

Shouldn’t we be shouting victory as soon as God gives us our marching orders?

That’s right. The victory in God’s promise is a done deal. A slam dunk. But only if we believe that the victory is ours. And if we are willing to do our part. If we go and get it according to the Lord’s instructions.

“The promise comes with a process.”

Ha! Exactly. God’s process. God’s rules. God’s timing. Not SuperGal’s. Are we guilty of trying to do God’s work our way? In our timing?

“Where there is VISION, God will give PROVISION if you will submit to SUPERVISION.”

God always, always has a reason for being specific in His instructions. Just “bring your stuff to it, and let God do it!”

We don’t need to see the entire plan laid out for us. God doesn’t need to present evidence, Your Honor. That’s what faith is for, isn’t it?

“Faith is its own evidence.” “The evidence that this is going to work, that God will keep His promise, is in the past.”

When you look back, you will see that he kept that promise, and we can use that knowledge to have full faith that He will keep this promise, too. Faith is its own evidence.

SuperGals, if your breakthrough is still ahead, go ahead and shout the victory right now. Every day. Today could be the day.

Even if we are “stuck,” we can take joy in knowing the end is around the corner.

I won’t dare quit. I don’t want you to quit either. As we frequently say at Second Baptist, “If God brought you to it, He’ll bring you through it.”

Day 7 is right around the corner. “Make your last one your best one!” Your breakthrough and blessing is assured by your faith.

Shout your praise to God for His promises right now! Then wait for the walls to fall.

“And the seventh time, when the priests had blown the trumpets, Joshua said to the people, Shout! For the Lord has given you the city. ~ Joshua 6:16