When God Moves Into Your House
Tuesday, January 21, 2014 by Lori Hynson 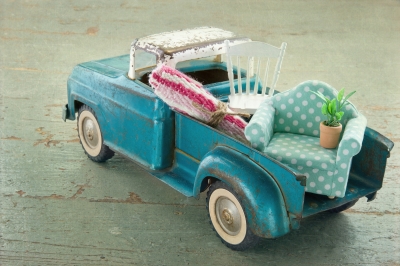 . . .He rearranges the furniture.”

That’s what Reverend Hamlin preached eleven years ago when I joined his little church.

Yo! He wasn’t kidding.

If you’ve read SuperGal vs. GOD, you already know that God did more than rearrange my furniture back in 2005. Oh yes, He did. He packed up my stuff, tossed out the clutter, hoisted it all into a moving van, and sent my old life rumbling away. By the time I realized what was happening, all I could do was squint at the receding truck’s taillights until they were gone from sight.

I stood in place, wondering where I was going and how I would get there. I didn’t know yet that God had everything under control. He had pointed my unseen compass to joy, but that was to be many strife-filled miles down the road, a road riddled with trials and tests of faith.

But nobody told me it would happen again.

That our furniture arrangements change with the seasons. God’s seasons.

In 2013, God sent some new décor to enhance my style: the gift of a completed and published book. I thought publishing a book was a pretty momentous happening, right? An awesome new accessory.

I thought the birth of two grandbabies in one year was an incredibly wonderful paint job.

I thought that was the end of the upgrade.

The demolition and reconstruction phase was yet to come.

While I happily and SuperGalishly dove into book launches, book marketing, book website creation, book-book-book everything, other parts of my life began to slide around. Fall off the coffee table. Disappear behind the sofa.

The solid plaster walls of my life as a successful business owner began to peel. Crack. The pressures mounted.

Or maybe my structure just began to finally bend under the weight of the many years of pressures that had always been there.

Pressures that I thrived on back when I was SuperGal. Back in my self-reliant, superhero days.

Pressures that as a Recovering SuperGalaholic, I now began to resent. After all, I had learned the hard way during my big life-storm that my own super powers were kind of lame.

Family treasures fell into the rubble. We lost our much-loved sister, Kelly Adams, to cancer. Quickly and quite unexpectedly. Along with grief over her loss came another pressure—the realization that life here only lasts so long. No guarantees of tomorrow.

No longer a full-blown SuperGal, I clearly recognized my own mortality.

And the roof began to rattle.

BAM! Could I realistically plan on spending time with my husband, the one I struggled for so long and so hard to keep, “someday?” In the decades to come?

BANG! Could I expect my elderly mother, who needed more help now, to be waiting when I found time?

BOOM! Could I expect my precious grandchildren to stay frozen in time so I could cuddle them later, when I could fit them into my schedule?

Then came the Hand on my arm, pulling me from that room.

“It’s time to go, kiddo. Things will look different for you now.”

Why was I so surprised that God was telling me to get up? To move from my comfortable place? Telling me it was time to leave that room, and find a new one?

Time to let God go to work on my new design. He was here to redecorate my interior.

In true SuperGal fashion, of course, I resisted. “But Lord, you know I’m not that crazy about surprises, about taking chances. Do you understand what you’re asking me to do?”

God’s instructions were clear. He wanted me to hand over my fear. To get on the bus, Gus. To step aside in faith and let Him get busy with the new construction.

All by Himself. No SuperGal project management necessary. I would only see the finished project after the Big Reveal.

But no. That wasn’t going to cut it. God wanted me in over my head. Out of my control. But not out of His.

And so it was that on November 15th, too young to “officially” retire, this Recovering SuperGal hung a “going out of business” sign on my legal account management business. I took one last look around the room at a career in law that began when I was barely 17 years old. Several years sooner than I ever dreamed, I closed the door of my 42-year career behind me. It had been a blessing.

On November 15th, I stepped into my new ministry as a full-time writer, speaker and apprentice servant of the Master Interior Designer. Not to mention a wife, mother, daughter and Nana.

And on November 15th, as I prayed and journaled my questions about where my life was headed, in the quiet absence of too-busyness, God sat with me and began to point out His secrets, the ones hidden in plain sight in His Word.

Secrets that revealed the SuperGal traits in me which I still jealously harbored, perhaps only vaguely aware of their existence on the surface of my being.

Secrets that are of particular importance to us SuperGal types. Controlling, stressed, overburdened, burned-out and anxious SuperGals.

Secrets that would finally allow me to live in peace. And joy. To turn my back on my inner SuperGal demons.

And a greater purpose through an ever-deepening relationship with God.

Secrets of a Recovering SuperGal.

Join me this year as we explore these SuperGal issues. The list is long, but hey, that’s what I’m here for.

Let’s laugh with one another, gain some wisdom, learn some important secrets, and seek SuperGal Recovery. Together.

To everything there is a season,

A time for every purpose under heaven:

A time to weep, And a time to laugh;

A time to mourn, And a time to dance.